What’s Your Hot Button With Partners?

Partners – romantic and otherwise – tend to fight when one feels neglected or threatened. When Peter Bregman’s wife yelled from two rooms away, “at least pack the shampoo” she was feeling neglected.

Recognizing which underlying feeling is being evoked helps you know how to resolve the conflict. So discovered psychology professor Keith Sanford.

Which one is your hot button? Find out here.

When one feels threatened he sees his partner as critical, blaming, hostile or controlling. When one feels neglected it is because she perceives her partner as failing to contribute sufficiently to the relationship.

Sanford’s research shows it helps to talk about neglect yet discussing a perceived threat may not be helpful.

Sanford’s advice for being happy in love also make sense for any successful partnership or other collaboration: “For the most part, successful couples avoid letting fights get too heated. Specifically, they go easy on the four classic negative fighting tactics: 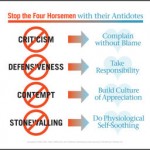 The famed marriage researcher John Gottman calls them the ‘Four Horsemen of the Apocalypse,’ because they can spell doom for a marriage when used too frequently.”

I can’t help but add that Gottman, “found one factor that was the best predictor of all. This was a positive predictor, one that predicted long-term success rather than failure in marriage.

Gottman found that marriages are likely to thrive when the man was willing to be influenced by his wife.” (Gentlemen – want to win points with the women in your life? Comment positively about this finding.)

When they do bring up hurt, anger, and other negative emotions, they often balance them out with a constructive approach. In the best-case scenarios, couples use conflicts as a time to express concerns and share emotions. Instead of telling his partner ‘you make me sick,’ a man could try saying something like ‘It hurt me when you called me lazy.’

Shifting the conversation away from the partner’s faults and towards one’s own feelings is a tried-and-true way to defuse even the most intense conflicts.”