Boost Your Visibility and Credibility Via Compelling Comparisons

You may be familiar with the multi-purpose cleaner and lubricant, WD-40. Many Midwestern newspaper readers were startled and amused when they read that a local woman uses WD-40 to keep squirrels from shimmying up her birdfeeder. Adroitly “piggybacking” on this news opportunity, WD-40 CEO, Garry Ridge, quickly did some research then declared to the writer of that article, “More people use WD-40 every day than use dental floss.” In so doing he was evoking the “Compared to What?” quotability cue – and you can too, to make your message more memorable and apt to be cited by others.

Hint: It is easy to be tempted to use a familiar comparison like this these yet you generate exponentially more credibility and visibility for yourself when you craft your own labeling comparison.

Here are some quick examples to prime the pump of your creative crafting of “Compared to What” messages for what most matters to you.

• “More people on earth have access to cell phones than toilets” was the United Nation’s dramatic way of seeking support to “cut in half the number of people without access to clean toilets by 2015 and eliminate by 2025 the practice of open defecation, which is linked to many diseases.”

Hint: Making these stark comparisons evoked two emotion-spurring images: the disgusting mental image of “open defecation” and the noble concern to enable people around the world to avoid getting diseases and live a cleaner, more civilized daily life.

• “Ten times as much funding is devoted to research on the prevention of male baldness as malaria, a disease that kills more than 1 million people each year” declared Bill Gates, advocating for more creative capitalism efforts to serve more people.

• Musician Jon Hendricks is the father of vocalese, the art of setting lyrics to jazz instrumental standards and then having voices sing the instruments’ parts. That’s why Time Magazine dubbed him the “James Joyce of Jive.”

• In offering the A.I.R. (Actionable Insight + Interestingness+ Relevant) formula for memorable messages I once wrote, “Interestingness is the instigator, the hardy carrier pigeon that can carry your message most anywhere.”

Hint: Draw a vivid and startling comparison with something else that is familiar to those you seek to attract.

To prime the pump of your creative thinking, here are other ways the “Compared to What” memorability cue has been successfully used by others.

• Want to instantly shape how others feel about you or something that really matters to you? Those fighting for more nutritious school lunches wrote, “A McDonald’s burger is safer than your kid’s school lunch. The government has given schools meat that would have been rejected by many fast-food restaurants across the country.”

• San Francisco security expert Michael Spearman made this droll comparison with the non-working cameras in housing projects: “Using these cameras without having anyone monitor them is like buying a condom and then punching holes in it.”

• A Cuban, after apologizing because he could not offer his guests anything to eat, described the results of Castro’s Revolution: “ The three successes were education, healthcare and sports. Three failures were breakfast, lunch and dinner.”

• The difference between salad and garbage is timing and chemistry.

• “We scoop poop” is Pet Butler’s brand slogan that often draws smiles from those who see their slogan.

Hint: We tend to remember rhymes.

“Like Netflix for baby clothes” is how Pamela Slim described Luitte Leihen, a rental service for parents in Germany that provides everything from clothes to layettes for a fixed price per month.

• To spur the chances the small size of his company may be viewed, not as a detriment but as stylish, the founder of Turnstone dubbed it “The Mini Cooper of office furniture.”

Hint: Make a favorable comparison between one of your key attributes or points and something that is positively familiar to those you seek to reach and/or serve.

• Tim Freundlich. the founder of a start-up incubator called The Hub, once described his organization as “a ZipCar for social entrepreneurs.”

Hint: In so doing he highlighted the “get one when you need one” benefit of both.

• “Sean Parker has access to trends and signals that are invisible to many people. For him it’s like hearing a dog whistle” said Shervin Pishevar of Menlo Ventures

• “Mimicking spider silk properties has been the holy grail of materials science for a long time,” said Jeffrey Turner, president of Nexia Biotechnologies, a Montreal biotech company that produces spider silk on a commercial scale with goats that have been genetically engineered to secrete silk proteins in their milk. Why is this valuable? Because the silk fibers they produce can be used for everything from sutures for microsurgery and fishing lines to bullet-proof body armor as tough as Kevlar.

• Ms. Judy Woodruff had been working in Washington since 1977, when she landed in the capital to cover President Jimmy Carter’s administration. The modern news cycle is a little different now — less of a cycle and more like a cyclone, the informational equivalent of standing in front of a tennis ball machine. At “NewsHour,” long known for its slower pace, viewership is up 20 percent over this time last year, with an average of 1.24 million viewers a minute, according to Nielsen.

Hint: In a longer characterization, you can pack in many vivid comparisons.

Hint: Negative comparisons, even more than positive ones, stick in our minds. It was back in college when my friend Jim told me his hometown, Stockton, was sometimes called “the armpit of the west.”

Hint: Yet be forewarned by Adlai Stevenson’s “Compared to What” admonition, “When you throw mud you get dirty.” From John Skowronski’s research on what he dubbed Spontaneous Trait Transference, we’ve learned that whatever you say about other people inevitably become a part of how those who hear you will perceive you. Thus the spotlight of your vividly specific praise of others positively reflects back on you. People will perceive in you the traits you describe in others.

• “One in seven people worldwide lack ‘food security.’ They are routinely hungry — without the minimal daily calories needed to survive. In plain language, they are slowly starving to death – a global concentration camp of hunger,” wrote social justice activist Jonathan C.Lewis, for The Skoll Foundation.

Hint: Notice the emotion-scaling power of specificity, when Jonathan couples a Compared to What (global concentration camp of hunger) with a specific statistic (one in seven)
and a new label for the dire situation (food security).

“When Frank smells blood, you’re toast.”
“It’s a long road to open a can of worms.”
http://joebots.com/2009/09/24/mastering-picture-perfect-persuasion/

Hint: Per these last two examples, see how mixed metaphors in “Compared to What” cues can draw attention to an attribute or a weakness, especially when they are humorous.

• Also consider crafting comparison images, then adding a caption (and/or inviting others to submit their own caption as a way of spurring involvement in your blog, business web site or other place. 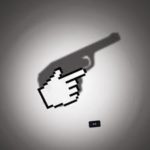 – This image, for example, might be captioned, “Pointing at someone in a moment of vulnerability can be as emotionally as aiming a gun.”

– “When you get to the heart of the matter your ideas can fly out to others” might a caption for this.

Want to submit alternative captions for one or both of these?

I hope these comparisons spurred your interest in creating Compared to What characterizations for what matters to you. If it does, please share them with us here.