Six Ways to Make Smarter Decisions By Not Getting Sidetracked

David Phillips was rushing up and down the supermarket aisles within seconds after seeing Healthy Choice’s “Early Bird Special.” He bought up all their 90-cent soups in the store. Then he raced over to a discount outlet to get all the brand’s 25-cent chocolate pudding cups. No time to pause. Phillips asked the store manager to order 60 more cases, and then requested the addresses of the chain’s other local outlets. The next weekend he and his mother-in-law to drove a van from Fresno to Davis, buying up all to the pudding cups in those stores.

He and his wife quickly realized they had mountains of products from which to tear off the bar codes needed to submit for proof of purchase by the offer deadline, but he was unstoppable. He offered The Salvation Army and two food banks all the products he’d bought if they’d get volunteers to tear off the labels in time. That food donation got him an $815 tax write off.

You see, this dedicated family man and civil engineer had framed this complex effort in his mind as an opportunity that motivated him to accomplish his goal, and not get sidetracked along the way. He’d figured out that it was much cheaper to fly his family to Europe by nabbing that Early Bird Offer for free miles rather than by buying the tickets. Methinks he was the only one to do so. 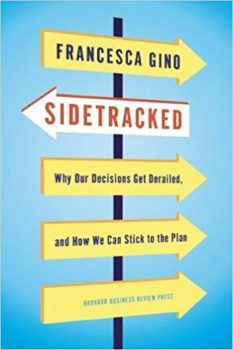 Hint: Frame a situation around a much-cherished goal and you are more likely to stick to that goal and possibly sway others to seek it too. That’s one of many stories with lessons for sticking to a plan that psychologist and Harvard Business School professor Francesca Gino offers in her classic book Sidetracked.

While framing and some of experiments and concepts in her book will be familiar to some, the collection of “stay on track” actionable tips she provides is a good primer for making smarter choices — or attempting to sway others. She describes three ways we are misled: by our own perceptions, influence from others, and irrelevant information upon which we rely.

Here are six of Gino’s tips that stuck with me:

1. Sell the positive rather than citing the negative. More people are likely to buy meat described as “75 percent lean beef” than “25 percent fat.”

2. Toss in the first awards when offering a loyalty card. Many more people came back to a car wash and came back more often when they were gifted two free stamps on their promotion card that offered “buy eight car washes, and get your ninth one free” than those who were not give those freebies up front with the card. This “endowed progress effect” builds in the artificial effect that they are already on their way to the goal, so recipients are more persistent in reaching it.

3. I’m better than average. From driving to investing, research shows that most of us believe we are more “capable and competent than others,” Gino found, so we are overconfident in our own opinions even when we hear credible information that conflicts with our view. Plus, the more powerful we feel in a situation, the more inclined we are to ignore others’ advice.

4. It must be valuable because I paid for it. Gino describes how her father, a doctor, found that patients were much more likely to follow his recommendations when they wrote him a check than when they got, “the exact same recommendations without spending a penny (when their health insurance took care of the cost).”

5. Exacting revenge later. After seeing a clip from the movie My Bodyguard, in which a new boy in school is relentlessly bullied, those in an experiment felt angry on behalf of the boy. In the next, apparently completely different experiment, participants felt less trusting of others and more likely to disregard their views. Such “incidental anger triggered by a prior and unrelated experience” can cause us to become more critical of others in the next situation after being upset. Our emotions can sidetrack our thoughts, choices and even friendships.

6. It’s hard to step into their shoes, yet you can and boost teamwork. At least in our minds, we instinctively “over-claim” how much we contributed to the team or household work. Seeing the other person’s point of view is very difficult. Yet one remarkably simple sequence of asking two questions can help us make a shift in perspective.

When asked about their contribution to a project, psychologist Kenneth Savitsky found that “each member’s self-reported contribution added up to more than 100 percent.”

Yet he discovered that if each participant was first asked to explicitly think about each member’s help and attribute a percentage, “the tendency to over-claim almost disappeared.”

Hint: Imagine if this approach to team debriefing, at different stages, was widely adopted — it could not only boost self-awareness but team solidarity and esprit de corps.