Say it So They Remember and Believe It 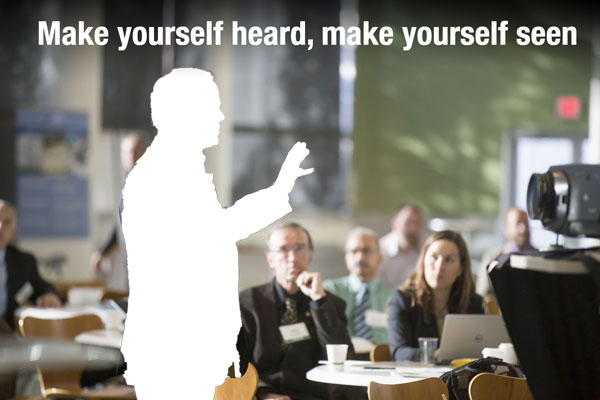 Dusk settled coolly over the vineyards in Napa Valley, California, one fall evening. Through the window, we gazed wistfully at a thin stream of bittersweet chocolate sauce a waiter was ladling high over a raspberry-colored cake at the table of a hand-holding couple, inside the big stone restaurant operated by the Culinary Institute of America. I knew it was bittersweet chocolate because the rich smell was drifting through the French doors out onto the patio, where we were drinking a fine Cakebread cabernet next to two giggling toddlers, just as happily chewing red licorice twists from the local 7-11 store.

See the picture? Here’s the pity. As adults, we tend to lose our “picture-making” way of speaking. We forgot to tell the story that tells the story. We’ve forgot how to speak English like it tastes good, even when we desperately want people to remember what we are saying. Our conversations often begin with sweeping generalizations. To further numb others, we talk about “work” by using longer sentences, full of jargon that even colleagues won’t remember the way they’d remember everyday language wrapped around a vivid, apt example.

Unlike most children under the age of 12 or so, we adults offer qualifiers and chronology before we finally get to the delicious details that are most involving, credible, and evocative. That’s akin to verbal underbrush. By then, even well-intentioned listeners may have gone on a mental vacation. Think of the speeches, advertisements, and conversations you most remember. Didn’t the words evoke some visual experience?

Let ideas roll around in your mouth like a good merlot. The specific detail proves the general conclusion. It’s also more credible and memorable. The generality fades quickly. For several years, many ad campaigns featured a group photo of “diverse” people, with some variation of this headline: “We Are the People Who Care.” Banks, insurance companies, hospitals, and other large institutions thus offered a generality that perpetuated their impersonal image instead of promising some specific service, guarantee, or customer story that proved how they were better than the competition.

Avoid gray generalities. Speak in Technicolor. Say less, better. Make your most important truths well-told — how you describe those who matter most to you, or your job, product, program, cause, or idea. Ironically, because you are so close to these topics, and care and know so much about them, you are most likely to speak generally about them. Steven Pinker dubbed this The Curse of Knowledge.

Big Opportunity for You: Know that whoever most vividly characterizes a situation, idea or person usually determines how others picture it, feel about it, discuss it, and decide on it. If your description is more credibly specific than someone else’s even if that person has more money, smarts, charisma, attractiveness and/or power to push her or his message, others are more likely to believe, recall and repeat yours. Even those who disagree are likely to use your description as they talk about their disagreement. Think how influential you are when you thus speak English like it tastes good.

Become more memorable by saying it better next time in one or more of these specific ways:
• Before you speak, reverse the sequence of what you instinctively say, putting the example before the conclusion. Give the specific story, detail, vivid contrast, or client’s situation and how you solved it or an unexpected twist of detail that pulls listeners in.

• Speak or write to evoke a smile, or at least a pause. Evocative words deepen the listener’s memory and feeling for what you say. Such words can be heartwarming, quirky, poignant, humorous, inspiring, startling, and more.

• Quirky: My second book dedication was “To Thelton, without whose companionship this book would have been completed much earlier, but life wouldn’t have been nearly as sweet.”

• Poignant: The first words of an inexpensive but highly successful radio public service announcement began with a man saying: “One in three women who are murdered in this state (pause) are murdered by their husbands.” He ended the two-sentence PSA with, “If you even think there’s a slight possibility that someone you know’s life is in danger, do what I didn’t do for my sister. Call this number…”

• Humorous: My friend Paul Geffner’s chicken take-out restaurant in San Francisco was called “Poultry in Motion.” Montana cowboy friend Hank D. modestly accepted an award for heroism by saying simply, “The sun don’t shine on the same dog all the time. Thanks for this sunshine.”

• Use words from the real world. Which was easier to remember the first time you heard these company names: “Intel” or “Apple”?

• Use a metaphor from the common cultural experience of the people with whom you are talking. For example, columnist Albert Hunt wrote recently, when describing the winners and losers in Congress’s impeachment debate: “A man who touches more bases than the New York Yankees, Tom Daschle now has the solid support and confidence of the other forty-four Senate Democrats.”

Even if they didn’t intend to, get others to remember what you say. Here’s four ways:

1. Imagine that the brain is like a wall with clothes hooks on it. For the brain to catch and retain a detail, that detail must hang on one of the memory-inducing hooks that are already in the brain. The biggest hooks are the three universal and core life experiences: 1) family, 2) hometown or town where you have lived or are living, and 3) past or current kind of work. For family, relate what you’re saying to a family situation: yours, theirs, someone else’s, or even a metaphorical family of services. Or relate your topic to the listener’s work situation or work with which she is familiar. People also remember landmark places where they live, have lived, or have visited or well-known places. For example, our business is in Sausalito, which evokes pleasant by-the-bay memories for most who’ve visited here.

2. Motion makes memories. Whenever people are moving or see movement, they remember more and are more emotional about what they remember. Get customers in motion with you in a positive experience and they will be more fervent, vivid, and believing fans, more likely to evoke their bragging rights and likely to share their experience with others. That’s why we literally move to offer samples, getting people to reach out, so they feel the experience more deeply.

An experience is most memorable when you and the other person are both in motion, such as when you shake hands, walk together, or reach to exchange something. Pick those ripe moments to say the most vivid, specific detail you want the listener to remember and repeat to others. Times are next most memorable for the listener who is in motion even if you are not. Ask the person to reach or turn for something while you’re saying your tasty tidbit to remember. The next most memorable movement is when you are in motion, even if your listener is not. A final valuable way to evoke a memory is for you both to watch motion from something or someone else.

Warning: Movement is a two-edged sword — it is never neutral. The listener who experiences something negative where motion is involved will also remember the experience longer, and more intensely. As to a vibrating pole, we hold on sooner, longer, and more strongly to the negative incidents of life than to the positive, because the primitive triune part of our brain — wired to help us survive — causes us to respond to appearances of danger more strongly than to those of delight.

3. Speak first to the other person’s most current, pressing interest or need. Just as those in the market for new cars are most likely to hear car ads on the radio, all people listen sooner when you first speak about what is most on their mind at that moment. Sadly, in fewer than 5% of interactions when we want something from someone else do we first speak about what matters most to them. We are more likely to speak about our own interests first.

4. Speak in vivid, specific details that have a high emotional value for the listener. Read the beginning of this column to remind yourself to the power of specificity. It boosts your self-clarity, reduces the chance of others misunderstanding you and it strengthens your messages memorAbility and credibility.

The good news? If you practice speaking first about the other person’s interests, then about what you share in common, and only then about how that commonality relates to your interests, four amazingly powerful changes occur in how that other person relates to you. The person listens sooner, listens longer, remembers more, and assumes you have a higher IQ than if you first speak about your own interests.