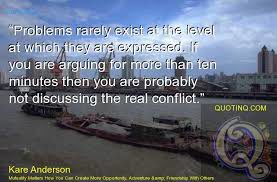 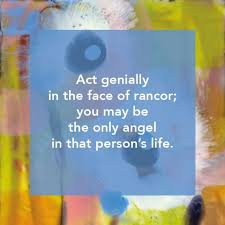 When I saw my dear friend, Daniel, walking down the hall toward me that morning I smiled and held up the book I’d gotten for him. When Daniel saw me he looked stricken. Then he quickly wheeled around and shot into the men’s room. Deeply hurt, I avoided him for several weeks until his sister called to tell me that their mother had finally gotten a court order requiring their father to leave the home because he had been hitting her brother. She said her brother was embarrassed about not being able to defend himself and that was why he was avoiding me.

I was in third grade yet that memory is as vivid as yesterday’s conference call where a colleague was abrupt, even hostile-sounding. Ten minutes after the call he sent us all an email, apologizing for his rudeness, explaining that he’d broken his arm the day before, had it in a cast but the pain medication was not yet working. Ashamed as I am to admit after all these years of practice, my instinctive reaction still kicks into gear when I feel wronged or simply mistreated.

When others appear to be behaving badly, we tend to sink into our own feelings, blinding ourselves to theirs.
We are more likely to fall into a destructive behavioral trap. Sadly, when we do, we cannot be empathic. We weaken that human bond that’s vital to re-grouping and resilience. These blinding mindsets make us feel dumb, powerless … and alone.
Out of our primitive Fight or flight instinct, our first move is to self-protect. We react rather than taking a moment to consider how to act. We make the other person wrong for their bad behavior.

We are more likely to fall into destructive behavioral traps I’ll describe. These blinding mindsets make us feel dumb, powerless … and alone. 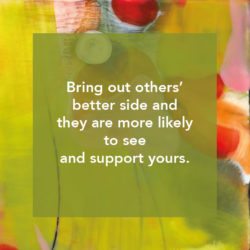 When you recognize the actions that most upset you, you can plan how you will act in those situations. And you are more able to see them sooner. This is akin to learn defensive driving where we look several cars ahead to better avoid accidents.Without rancor, ask for more information. Be willing to step into their shoes, and see the situation their way. The ultimate reward, as Peter Bregman so astutely noted in “Do You Know What You Are Feeling” is that you can deepen a relationship rather than damage it. Rather than reacting, choose how you want to respond and possibly preserve a relationship.

Your reward: you are much less likely to let somebody else determine your behavior.

1. Jumping to Conclusions
You interpret things negatively, even when there aren’t facts to support your conclusion. Here are two common ways.
Mind-reading: You arbitrarily conclude that someone’s behavior means they are reacting negatively to you.
Fortune-telling: you predict that things will turn out badly.
Both assumptions cause us to instinctively act in ways that may prove us right.
“If you understood everything I said, you’d be me.” ~ Miles Davis
2. Emotional Reasoning
You assume that your negative feelings reflect the ways things really are: “I feel guilty. I must be a rotten person.”
“Assumptions are the termites of relationships.” ~ Henry Winkler
3. All or Nothing Thinking
You see things as white or black categories. If a situation is anything less than perfect, you see it as a total failure. You probably have trouble, when faced with a plethora of choices, “satisficing,” that is making a choice with which you feel comfortable.
“We don’t see things as they are. We see things as we are.” ~ Anais Nin
4. “Should” Statements
You tell yourself that things should be a certain way that you expected or hoped they would be. We often try to motivated ourselves with “should”, “ought” and “should not” feelings and statements as if we must be punished before we can expect ourselves to do something – or not do something.
“Conflict is inevitable, but combat is optional.” ~ Max Lucade
5. Mental Filter
You pick out a single negative detail and dwell on it, ignoring all others. For example, one sentence of perceived criticism erases all praise you have received from someone. Just like healthy marriages, enduring relationships need at least a 5:1 ratio of positive to negative interactions to thrive. Those with negative Mental Filters need a much higher ratio and, sadly, are less likely to attract it.
“If it’s mentionable, it’s manageable.” ~ Mr. Rogers
6. Over-Generalization
You see a single, negative event as the extension of a never-ending pattern of negativity. Probably you use “never” or “always” when thinking speaking or writing about it. This is one of the three patterns of pessimistic people cited by Marty Seligman in Learned Optimism for which he offers alternative behaviors.
“Every person you fight with has many other people in his life with whom he gets along quite well. You cannot look at a person who seems difficult to you without also looking at yourself.” ~ Jeffrey Kottler
7. Over-Personalization
When something bad happens to you it is worse for you than for everyone else. You see the situation as being all about you without seeing how it has affected others or how similar things have happened to others. This is another example of how pessimistic people instinctively react to situations.
“We can often do more for other men by trying to correct our own faults than by trying to correct our own faults than by trying to correct theirs.” ~ Francois Fenelon.
8. Permanently Awful
This bad thing that just happened to you feels like it will haunt you the rest of your life. One must be on guard. The cloud will not lift. You are helpless to improve your situation. Don’t let that be your sequence of reactions.
“Behind the cloud the sun is still shining.” ~ Abraham Lincoln
9. Labeling
This is an extreme form of all-or-noting thinking. Instead of saying “I made a mistake,” you attach an all-encompassing label to yourself: “I am a loser.”
“Don’t be afraid of opposition. Remember, a kite rises against, not with, the wind.” ~ Hamilton Mabie
10. Magnification
You exaggerate the importance of your problems and shortcomings, or you minimize your positive qualities. This is also called the “binocular trick.”
“Never attribute to malice or other deliberate decision what can be explained by human frailty, imperfection, or ignorance.” ~ Rabbi Harold Kushner
11. My Bad
You hold yourself personally responsible for events that are not under your control.
“If we could read the secret history of our enemies, we should find in each person’s life sorrow and suffering enough to disarm all hostility.” ~ Henry Wadsworth Longfellow
12. Discounting the Positive
You reject positive experiences by feeling they “don’t count.” If you do a good job, you tell yourself that anyone could have done as well and reject other’s praise.
“A pessimist sees difficulty in every opportunity; an optimist sees opportunity in every difficulty.” ~ Winston Churchill
13. Attribution Bias
When Jonathan feels frustrated he usually furrows his brow. That’s why he thinks, when Juan frowns, that he is bothered. Yet, for Juan this facial expression means he is deep in thought. Don’t assume that when someone else does or says something it means exactly what you would mean if you acted that way.
“When patterns are broken, new worlds emerge.” ~ Tuli Kupferberg

Try the Flexible “Us” Mindset to Sidestep These Traps

The good news? We can change and draw strength from others in ways that encourage them to seek us out rather than avoiding us. By recognizing these very human reactions we can choose to pause, step back and see the larger perspective: how to care for the “us” in the situation rather than being preoccupied, only thinking of “me.”
That “us” stance may enable you to:
• Not deepen the rut of self-destructive behavior when similar situations recur.
• Bring out the better side in the others.
• Attract mutually-supportive relationships.
Another benefit of cultivating this resilient mind-set is that you can broaden rather than narrow “your thought-action activity towards a specific action of promoting survival.”
“If we don’t change the direction we are going, we are likely to end up where we are heading.” ~ Chinese Proverb

As Greg MycKeown notes in the Unimportance of Practically Everything, you can accomplish a lot and live a satisfying life if you just do a few things well, and practicing ways to burnish rather than bust relationships in more situations is surely one of them. I deeply believe that those most likely to be able to sidestep these traps have the seven personal characteristics that Mary Michelle Scott and David K. Williams cite as vital traits to seek in new hires. Methinks that Doug Stone, Karen Christensen, Tony Schwartz, Clayton M. Christensen and David Brooks might agree. 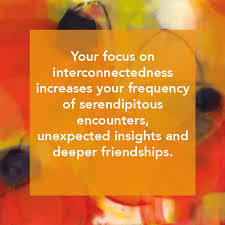 My final three pieces of advice that have held me in good stead when I have managed to adhere to them are these:

1. In any, sometimes difficult, relationship you only and always have three choices to make it better for you and perhaps them. You can accept the other person’s behavior and focus your mind on the part of that person that you can truly admire, rather than what irritates you, or you can change how you are acting around that person, or you can leave the relationship.

2. Speak to their positive intent, especially when they appear to have none.

3. Whatever you praise you encourage to flourish.

Here are some related books that you, too, may find helpful: Quiet, Situations Matter, Out of Character, Consequential Strangers, Mindset, When Things Fall Apart and Learned Optimism.