Why Waiters Cried While Serving Our Breakfast

Here’s the unexpected way my client, the CEO of a Berlin-based maker of wireless portal equipment named Punjabi, crafted positive, long-remembered situations to honor his staff after a rugged yet very successful third year of operation where everyone had worked long hours: Instead of handing out the ten top team awards in the traditional way, at a company event, the CEO took the time to find a significant group related to each of the winners.

For those winners the groups to which they belonged included a worship center, rugby club, college alumnae organization and an antique car association. With the permission of these organizations, the CEO arranged to give the award and an eight-minute speech, describing both the winner’s accomplishments at Punjabi and a specific incident where the winner exemplified the heroic character of a true team player. Thus each (surprised) winner got to bask in the spotlight in front of valued people in her or his non-world world.

The CEO’s greater effort also put his company in a genuinely positive light in many new places. Although it did not appear that any of the people who saw their friends receive the award were immediate, potential customers of Punjabi, they were sufficiently inspired to stir some positive word-of-mouth buzz about the awards ceremonies.

A month after these unexpected award ceremonies a feature writer for the equivalent of the “lifestyle” section of the main Berlin paper heard about one of them through a friend-of-a-friend-of-a-friend who was a rugby player with her husband. Not one to be interested in business stories, she was nevertheless touched by the way the ceremonies had rippled out to surround the winners’ lives.

She tracked down the CEO and interviewed him, thus affording him another chance to speak glowingly about specific examples of his winners’ dedication and ingenuity. As he praised each person, the glow of the values he admired reflected back on him and his company.  The reporter also interviewed the winners and several of the people at the organizations where the award events occurred and then she wrote a popular human interest story that appeared, with photos, in a Sunday edition.

The article generated several glowing letters to the editor by people who witnessed the ceremonies, the winners and others who were also moved by the story. Mr. John Sunui, vice president of sales for Singapore-based construction management firm happened to read some of the letters in the paper while eating his breakfast in a hotel while in Berlin on business.
Sunui emailed the reporter to request a copy of the original article that the reporter emailed back the next day and he received when he returned to Singapore.

That December holiday in Singapore and in 14 other countries where Sunui’s company has offices, both the office director and one person in each office who has done an outstanding job at their work, as voted by their co-workers, will be happily surprised when they walk in the door at some place that is special to them to be greeted by a company representative who will give them a present and tell a story about another side of the winner that their friends in that organization may not know about.

How can you give a lasting and perhaps the most widely-known gift that ten people you admire can receive? For each person think of the specific incident where that person has exemplified the quality that you most admire or cherish.   Re-play the situation in your mind so you can describe it in all its story-building, touching detail. Begin with the specific example before you end with the general statement that summarizes your admiration. That way, you make the story, and the person, more vividly memorable to others who read or hear it.

Next step: for each person envision what group to which they are affiliated (family, religious organization, hobby or other interest or professional group, etc.) that would be most significant for that person if you were to praise her or him while in front of them.

Two years ago I learned that Janice, a skilled meeting planner who had hired me to speak at her association several times over the years, and who was exceptionally gracious and generous with me, had contracted leukemia. I learned this from her assistant who called to confirm some details regarding my next presentation at their annual meeting.

On a long plane flight back from another speaking engagement, I looked out the window, thinking of Janice, and conjured up this idea for a third party endorsement of the Hawaiian-born meeting planner which would reflect one of her most passionate interests, gardening. I called the association’s executive director to share my idea and he immediately agreed.

Two months later, just after I was introduced to speak at that association’s convention’s opening breakfast, I moved to the center of the raised stage, signaling the 500 attendees to also rise from their seats as the board president caught the elbow of our surprised meeting planner, Jana, who was at the bottom of the stage steps, still focused on making sure the room lighting would be right for my speech.

He guided her up the steps as I stepped back to the side of the stage and the first person in the audience, roving mike in his hand told a vignette of how Jana had guided him at the beginning of his career. As Jana reached the center of the stage, in front of the people she had served for 14 years, eight other people in various parts of the room lifted their mike and told their brief story about her.

Then a tenor saxaphone player stepped out from the side of the stage to serenade Janice with a fragment of her favorite Kenny G song as the screen on the stage was filled with purple words on an emerald green (her favorite colors) background, “Jana is a special flower” followed by a swift changing set of images of Janice in several situations.

As the song ended, on cue, all 500 people pulled from out of their pockets and purses the fragrant Hawaiian-grown white flowers, the gardenias, tuber roses and pikaki and held them aloft towards Jana. The board president handed Jana a bouquet of the flowers and asked Jana to speak, which she did, briefly, through her tears.

Even several of the hotel waiters were standing still, crying by then. (My speech had, of course, been moved to the luncheon so people could drop by Jana’s table to say their warm greetings through the ensuing breakfast. ) 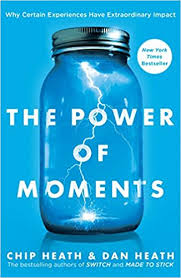 Learn more about how to create meaningful group experiences by reading a wondrous book with actionable insights and real life examples: The Power of Moments by Dan and Chip Heath.

Here are other ways to offer heartfelt, long-lasting third party endorsement gifts to those you hold dear:

• Donate money or another gift to a charity or cause in which that person is active, and ask that your story about them be included in any acknowledgement of the gift.
• Seek out places that person frequents and see if you might buy a needed piece of equipment or repair in that person’s name. In our Sausalito church, for example, you can pay for a hymnal and dedicate it with a related phrase, to someone you love. So every Sunday, someone at my church opens up a hymnal with this hand calligraphic message on the inside front, dedicated to my mother who loves piano music, “To Lestelle whose piano playing washes away the dust of everyday life.”

• On an object that person might uses frequently (coffee mug, bath towel, key holder) imprint or monogram a positive nickname or one phrase characterization of the “hero’s” action. To my English rugby-playing friend, Richard, we’re giving a glass beer stein with these words etched on the bottom, “Great giver of bone-crushing hugs.”

• Make a large, colorful postcard on which you write a description of the positive incident involving your hero, then ask your colleagues who agree to join in signing it before sending it to that person’s home. Give a gift to the person’s partner in work or personal life, as an acknowledgement of your admiration.

• Make a banner or poster, with a celebratory sentence and an enlarged and flattering image of the hero and hang it in a prominent place (wall or door of the person’s office, home or event). Find a place the person frequents (dry cleaner, golf club) and offer the business manager at that site your credit card number with a set dollar limit. Ask the manager to pay the next bill of your hero, fax you a copy of the bill, and hand the manager a gift card with your inscription on it to be given to the hero at their next visit. (You’ll create your own variation of this method, I’ll bet.)