Specificity Can Become Your Superpower 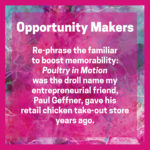 It strengthens your self-clarity, credibility and connectivity. It also increases the chances that people will understand and remember what you say.
Self-Clarity: Getting clear about the main point you want to make enables you to then identify the best example that supports it. What sometimes looks like others’ resistance to your idea may simply be your lack of clarity about it. Your clarity regarding your most vital mission and your differentiating benefit shines a light on your best path forward. Dr. Donald Berwick, a long- time advocate of hospitals using research-based ways to save lives, announced his bold initiative at The Institute Health Improvement back in 2004. He advocated six very specific interventions and labeled the campaign “100,000 Lives.” Within two months, more than one thousand hospitals had signed up. Eighteen months later, when he returned to speak at the conference, he said, “Hospitals enrolled in the 100,000 Lives Campaign have collectively prevented an estimated 122,300 avoidable deaths and, as importantly, have begun to
institutionalize new standards of care that will continue to save lives and improve health outcomes into the future.” As German poet, playwright, historian, novelist, geologist, botanist, science historian, and natural philosopher, Johann Wolfgang von Goethe was cited in Brainy Quotes as saying, “Everyone hears only what he understands.”
Credibility: With the right example, fact, or other detail, you provide proof for your general conclusion. A specific example, with supportive points offered afterward, can support a general conclusion yet not the reverse.
Connectivity: Starting with an example that others can connect with reduces the chance they won’t listen or understand what you mean.
Being Understood: Your specificity reduces the chance of others misunderstanding what you mean.
Memorability: Examples help your idea stick in others’ minds, even if they were not intending it to.

Let Your Word Picture Evoke an Apt Emotion
Evocative words and phrases, especially those that are heartwarming, quirky, poignant, humorous, or startling, deepen the listener’s memory of and feeling for what you say. Here are a few examples:
Heart-warming: Isn’t “Doggie Care” a more emotional name for a dog-washing and kennel service than, say, “Canine Care”?
Poignant: The first words of an inexpensive but highly successful radio public service announcement (PSA) began with a man saying: “One in three women who are murdered in this state (pause) are murdered by their husbands.” He ended the two-sentence PSA with, “If you even think there’s a slight possibility that someone you know whose life is in danger, do what I didn’t do for my sister. Call this number…”
Humorous: My friend Paul Geffner’s chicken take-out restaurant in San Francisco was called “Poultry in Motion.” A Montana cowboy friend, Hank D., modestly accepted an award for heroism by saying simply, “The sun don’t shine on the same dog all the time. Thanks for this sunshine.”
Familiar: Use words from the real world. Which was easier to remember the first time you heard these company names: “Intel” or “Apple”?
Become more frequently quoted by discovering a proven Way to practice getting specific sooner, described in my latest book, Opportunity Makers Have Greater Impact, Meaning & Joy with Others where you can also discover 60 ways to become more deeply connected and widely quoted.