Increase Your Impact by Getting Specific Sooner

The smaller the coffin, the heavier it is to carry,” Pakistani Defense Minister Khawaja Asif told
CNN host Christiane Amanpour. Then he went on to describe a Taliban massacre where many children were killed. Asif didn’t try to evoke an emotion with grand generalizations. Instead he generated deep caring and curiosity via his specificity. You, too, can gain immense power by starting with a relevant, specific detail. Get listeners to picture and feel first so they can’t help but think about it. That’s probably why this opening statement pulled others into wanting to learn more.

In his speech, “I Have a Dream,” Martin Luther King Jr. spoke of the hope that “little black boys and black girls will be able to join hands with little white boys and white girls as sisters and brothers.” In so doing he gave us an indelible word picture that many of us are moved by and uplifted to repeat even today. He did not offer some generalization like “Let’s make the world better for us all.” He gave us a specific vision that has vividly imprinted in our minds for generations.

Pull Others in With a Relevant Example Upfront
“Robots are quickly becoming first responders at disaster sites, working alongside humans to aid recovery. The involvement of these sophisticated machines has the potential to transform disaster relief, saving lives and money. I’d like to share with you today three new robots I’ve worked on that demonstrate this,” said TED Women speaker, Robin Murphy, at the beginning of her talk.

Notice how she began with a fascinating, relevant, and specific detail. Then she cited her core premise, rather than the reverse. From there, she indicated she was going to give three examples, thus priming us to stay listening and remember more that we could repeat later. Her approach gets our attention sooner, keeps it longer, and makes us eager to hear more. 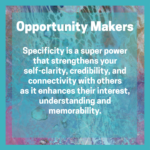 That’s also how four-star General Stanley McChrystal grabbed the attention of his audience from the first sentence of his TED Talk: “Ten years ago, on a Tuesday morning, I conducted a parachute jump at Fort Bragg, North Carolina. It was a routine training jump, like many more I’d done since I became a paratrooper twenty-seven years before. We went down to the airfield early because this is the Army and you always go early.

You do some routine refresher training, and then you go to put on your parachute and a buddy helps you. And you put on the T-10 parachute. And you’re very careful how you put on the straps, particularly the leg straps because they go between your legs. And then you put on your reserve, and then you put on your heavy rucksack. And then a jumpmaster comes, and he’s an experienced NCO in parachute operations. He checks you out. He grabs your adjusting straps and he tightens everything so that your chest feels crushed, your shoulders are crushed down, and, of course, he’s tightened so your voice goes up a couple octaves as well. Then you sit down, and you wait a little while, because this is the Army.

Then you load the aircraft, and then you stand up and you get on, and you kind of lumber to the aircraft like this, in a line of people, and you sit down on canvas seats on either side of the aircraft. And you wait a little bit longer, because this is the Air Force teaching the Army how to wait.” Notice how the sequence of specific details is akin to a “mental video” as you hear his high-stakes story unfold.

Indicate Upfront That You Have a Solution to a Need, Then Cite the Solution
Here are two examples for you on how to do this:
1. “The most important way Medicare for All would save money isn’t by slashing administrative costs. It’s by using the power and size of the government, like other countries around the world currently do, to negotiate favorable terms with drug companies and service providers. There’s a reason a CT scan costs $896 in the United States, but only $97 in Canada,” wrote Meagan Day and Bhaskar Sunkara in a widely cited article published in Jacobin magazine. Notice that by first citing the problem, then suggesting a solution, and concluding by specifically citing the benefit of Canada’s better approach, the change they advocate generates early interest, greater understanding, and credibility.
2. “At Salesforce, we believe that the business of business is to improve the state of the world. Pledging 1% encourages companies to dedicate 1% time, 1% product, 1% profit, and/or 1% equity back into the community—following the 1-1-1 model of giving that Salesforce pioneered,” said founder, Marc Benioff. Thus, he specifically and succinctly cited part of his Ohana-style culture policy. This explicit, public philosophy and formula also benefits Salesforce by burnishing its brand; boosting employees’ pride, morale, and motivation to stay at the firm; and heightening customers’ pride in buying from Salesforce.

Discover over 60 other actionable tips to gain more clout, credibility, visibility, quotability and the capacity to attract unexpected allies by reading Opportunity Makers: Have Greater Impact, Meaning and Joy With Others https://www.amazon.com/Opportunity-Makers-Greater-Impact-Meaning-ebook/dp/B07PLN6KWR