Asking “us” to join him rather than to fight “them.” Offering to meet with others rather than to battle to win. That, Dave Brooks writes today, is the defining difference between the two Democratic presidential candidates – and he saw it first on November 10th. Can ”a non-hierarchical, collaborative leader” really “inspire autonomous individuals to cooperate for the sake of common concerns”? Would you rather beat others or, as Doris Kearns Godwin wrote about 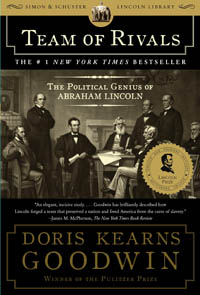 Lincoln, bring your rivals (and enemies) close and enlist them in “our” cause? Such an approach requires fortitude in the face of criticism and worse – and a focus on the goal. I find that attitude enormously difficult, despite my desire to move from me to we in my approach to work and life – with others. Do you? Can it trump negative campaigning?Yet, deep down, I do believe that, by bringing out the best side in others (their best talents and temperament) I am able to evoke my best side too.Reminder to self: Look to their positive intent, especially when they appear to have none.