What Happens When You Don’t Know Who’s Acting?

The playboy bunny I was “asked” to interview said she needed an automatic, rather than a stick shift on the Corvette her suger daddy was giving here. It was the only way she could sip her slurpy while driving. At that moment I wondered how I was going to write a straight story without

Another insight she offered was that her father, “as a gynecologist, was perfectly comfortable with my being chosen as Hugh Heffner’s new girlfriend.”Golly, sometimes there’s no room for parody.This was early in my reporting career – an assignment from my grizzled boss to demonstrate the kind of stories a “girl” reporter should cover.

Do you ever walk into a situation that feels like a warped scene for a film or, worse yet, that you are being thrust into a bit part in a B movie or TV reality show or soap opera? Yet, when professional actors are given droll lines and placed in a public setting where the

passersby don’t know what’s “real” then theatre plays out in everyday life. Some people love that and others flee the scene.

Recently, in Los Angeles, at the food court in a shopping center, a cashier at the kiosk, Hot Dog on a Stick sings her request for more napkins. In moments a nearby janitor, then a customer and finally a security 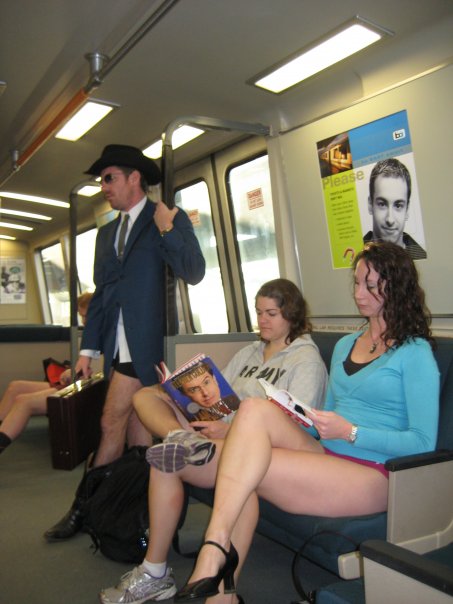 Watch how differently the passersby react.I hope that some of the 11 million people who have sat and watched their videos and gone out to create their own scenes with others. Keep your pants on?

The scene reminds me of the mock wedding and hilarious reception

afterwards that is actually a show you can buy tickets to see, Tony and Tina’s Wedding. As we, the audience, left the church wedding and crossed the street in downtown S.F. to attend the reception, we were stopped by nervous Secret Service agents. They were protecting the president who was staying at the St. Francis Hotel in the same block.  After being questioned, we moved onto the reception in a large upstairs room. From the jealous former-boyfriend to the catty bridesmaids in the bathroom ratting their hair, this mix of characters made one look closely at everyone, trying to determine who was acting. After awhile, several of us adopted a different persona and joined in the story.

Then there was the time I was invited to speak at a resort on the banks of a lake in Canada. The conference was for the holding company that owned five women’s magazines so attendees ranged from writers to accountants to models. One staffer designed a murder game that sent us, as detective teams, around the property, from the boathouse the cabins to the large dining room and the basement of the main lodge.

Also conferencing at the lodge were a Christian retreat, a sales kick-off and incentive winners with a high-tech corporation. Several of their members were recruited to play parts, along with the chef, bandleader and a maid. At the end of the game, all guests were invited to witness the questioning as we tried to find out who had played the role of the “murderer.”

It was a long and hilarious evening where many people probably acted differently than they usual did. And we probably had different memories of what actually happened that day.

mobs to a more involving level. People are more likely to leave knowing a bit more about themselves and each other. (We’ll be interviewing Rheingold later.) Through these experiences I

discovered how much fun it is for us to spontaneously join in the action and play different parts and see new sides of each other.

For those who are tired of sitting in neat rows to hear experts, consider going out and making a scene with others. Co-create scripts for more fun play at your next reunion, party, meeting – or night out where you make your own scenes rather than going to see a movie or play. Join a TheatreSports group. It’s all about making Me2We more fun.

Inclusion spurs innovation because we can see more sides of situations.