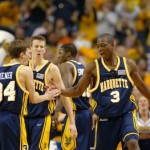 College basketball’s “Final Four” playoffs had few superstars. Tom Davis of NBC Sports wrote, “This is being billed as the ‘No Name’ Final Four.”

Michigan State coach Tom Izzo said, “The megastar that you normally seem to find in these Final Fours isn’t 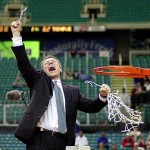 there. I think it’s refreshing that you’re looking at four teams that ‘team’ is the most important thing.” His  “Spartans are a collection of talented pieces that work on a whole-is-greater-than-the-sum basis.”

Sacrificing your solo superstar status for the sake of a higher-performing team takes strong leadership (meaning a coach/boss saying “You will play this way”) and/or total mutual agreement by the team to act, first and foremost, as a team.

Performing in teams – in any part of life – usually means results are either much worse or much better for the players. It all depends on how well the team works.

The dicey part is figuring out exactly how to get in sync, playing off each other’s best  – not worse – sides.

Motivation to figure out how “we” can perform well together

In this increasingly complex and connected world you don’t have a choice. Without combining your best talents with complementary others’ you may lose out to a better team.

That means we all must learn exactly how to forge nimble, productive teams to quickly solve a problem or capture an opportunity. That ability is vital to staying relevant and sought-after.  So here’s three key questions to help identify the best way for you thrive – with others. (I’ll bet you have others):

2. What kind of situations, people, industries or professions do you thrive in serving?

3. What rules of behavior, including decisionmaking, enable you to work well in groups?

“Everything that irritates us about others can lead us to an understanding of ourselves.”  ~ Carl Jung

Friction will inevitably happen in teams because “complementary talents” means that your teammates won’t act right, like you act. That’s when, instead of making others wrong, you thank them for sticking together, especially if it appears they may not.

“You can discover more about a person in an hour of play than in a year of conversation.” ~ Plato

Inclusion spurs innovation because we can see more sides of situations.