To Boost Your “Game” be a Great Sidekick 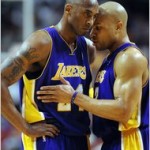 After the Lakers’ stinging defeat to the Suns what stuck in my mind was the image of Kobe Bryant and Derek Fisher staying behind in the locker room after teammates had left to hash over what happened. The intense conversation was their singular focus. That’s a sure sign of a strong partnership. How do they happen?

1. True partnership won’t happen without mutual respect and respect is rarely gained without earning it from each other:

“It started at a tournament in Long Beach over the summer,” Bryant said. “We were playing together over the summer, working long hours, and as the season went on, we didn’t play much, so we had to go in to work early and play a lot of one-on-one.”

“Fisher, a stumpy 6-foot-1 guard…would not back down to Bryant, who headed one of the gifted preps-to-pros classes of the 1990s. They clawed each other on court, commiserated off it and ultimately coalesced into an enduring tandem, the Lakers’ Lone Ranger and Tonto.”

2. Mutual trust rises sharply after partners experienced sticking together through a tough situation.  That trust is reinforced the more times partners demonstrate it for each other:

“ We’ve gone through different facets of life together,” Bryant said. “He’s always been a standup guy, a friend who is more like a brother.”

“When you’ve lived through fire together, the comfort level is there, before and after games, on the bus, text messages and whatever,” Derek Fisher said of Kobe Bryant.

3. Agree on a single and singular goal that reflects the sweet spot of mutual benefit. (You don’t have to be on a sports team to become higher-performing by agreeing on – not a bunch of “wants” – but one top goal):

“We’re constantly thinking about what this team needs in order to win a championship,” says Derek Fisher.

4. Bring out the better side in your partner:

“Most teammates thought Bryant was arrogant, aloof, out of touch with reality. Fisher believed he was just young and misunderstood.”5. An affectionate nickname is a sign of a cemented partnership:

“In a league currently obsessed with mega free agents contemplating coexistence with another outsize ego, seldom has there been a pro basketball partnership like Bryant and Fisher’s — the highly credentialed and often contentious superstar and his special vocational friend, the man Bryant affectionately calls Fish.”

6. Never let up on growing and on proving your worth to your partners and for yourself:

• Fisher said of Bryant, “As we’ve both aged, I think he respected the things I had to do to stay at a high level.”

• Coach Phil Jackson “thought Bryant’s appreciation of Fisher grew exponentially in 2000-1, when Fisher missed 62 games but returned for the playoffs and made 51 percent of his 3-pointers while averaging 13.4 points.”

• ‘He’s been giving him the ball ever since,’ Jackson said, while noting that Fisher, as the quasi point guard in the triangle offense, had enough currency not to reciprocate when he thought the ball should go elsewhere.”

• In their eight years together, Michael Jordan, so appreciated John Paxson as the Bulls’ spot-up jump shooter that “he made a personal appeal to ownership in 1991 when Paxson was in danger of being dropped.”

• “Two years later, Paxson repaid the debt, sealed the trust, when his 3-pointer from the left wing against the Suns nailed down the first of Jordan’s two three-peats. ‘The consummate pro,’ Jordan called him that night.”

8. After an important experience together, debrief first with your partner or team about what happened and how you’ll do better next time, then go out and face the larger world. The military and the FBI call such debriefings hot washs:

“Long after their Lakers teammates departed the locker room, Kobe Bryant and Derek Fisher lingered in the adjacent trainer’s area, visible through a plate glass window and in no apparent hurry to explain a stinging playoff defeat to reporters before they had seethed over it with each other. Their post-game meeting, according to Fisher, was just getting started.”

The Art of Being Business Partners and Friends

… and others’ ideas on some angle of Moving From Me to We.

The power to define is the power to choose. Power resides not in aggressiveness, but in conscious choice.