How to Avoid Decision Making Traps We All Fall Into 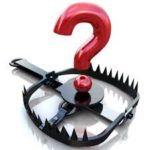 We can all make wiser decisions by understanding these common mental traps we often fall into.

This trap is the bias that leads us to seek out information to support our existing point of view while avoiding information that contradicts it. This bias not only affects where we go to collect evidence to reinforce a current stance or perspective, but also how we interpret the evidence we receive, leading us to give too much weight to supporting information and opinions and too little to those that are conflicting.

In one study of this phenomenon, two groups one opposed to and one supporting capital punishment each read two reports of carefully conducted research on the effectiveness of the death penalty as a deterrent to crime. One report concluded that it was effective, the other that it was not. Despite being exposed to solid scientific information supporting counter-arguments, the members of both groups became even more convinced of the validity of their own positions after reading both reports.

Two fundamental and extraordinarily powerful psychological forces are at work here. Please read the next two sentences twice, as they describe two of the more subtle and pervasive ways we let our rush of first emotions bias our better, more balanced judgment. The first is our tendency to subconsciously decide what we want to do before we figure out why we want to do it. The second is our inclination to be more engaged by things we like than by things we dislike a tendency well documented, even in babies.

What can you do about these traps? Always check to see whether you are examining all the evidence with equal rigor. Avoid the tendency to accept confirming evidence without question. Get someone you respect to play devil s advocate or build the counter-arguments yourself. What’s the strongest reason to make a different choice?

The second strongest? The third?  Be honest with yourself about your motives. Are you really gathering information to help you make a smart choice, or are you just looking for evidence confirming what you think you want to do? In seeking advice from others, don t ask leading questions that make your decision-making inclination evident. Make sure the people from whom you want perspective are not biased by your views and can offer you truly independent information and opinions.

How you make a decision is often determined by how you view your choices or how you frame the questions around it. For example, to reduce insurance costs, the neighboring states of New Jersey and Pennsylvania made similar changes in their laws. Each state gave drivers a new option: By accepting a limited right to sue, drivers could lower their premiums. But the two states framed the choices very differently, and how the state officials framed the vehicle owners’ choices for insurance costs made a $200 million difference in how the drivers in one state chose to pay versus those in the other state.  In New Jersey, you automatically got the limited right to sue unless you specified otherwise.

In Pennsylvania, you got the full right to sue unless you specified otherwise. As a result, about 80% of drivers in New Jersey chose the limited right to sue, but only 25% in Pennsylvania. A frame can establish the “status quo” or introduce an “anchor.” It can lead you to “justify past actions” or highlight confirming evidence. Several kinds of “frames” can distort our decision-making with startling frequency.

We tend to be risk averse and will look for reasons to turn down or avoid a decision where a loss, however small, is possible even if a larger chance exists for an upside gain. We also tend to adopt the framing of the situation as it is presented to us. Instead:

Don’t automatically accept the initial frame, whether you or someone else created it. Try to re-frame the problem or opportunity in several ways to see it from different sides and envision different potential outcomes.

Also try posing decision-making situations in a neutral way that combines gains and losses or embraces different reference points.  Throughout the decision-making process, ask yourself how your thinking might change if the framing changed.

We are all fairly good at estimating time, volume, distance, and weight because we make such decisions frequently and get quick feedback about our accuracy. We are less experienced (and get less verification) when deciding on less certain forecasts.  Weather forecasters and bookmakers have opportunities and incentives to maintain a record of their judgments to see when they have been accurate and to plan to replicate the accurate reasoning in their next decision.

We make mistakes in estimating and forecasting in one of the following three ways:

We believe we are better at making forecasts or estimates than we actually are. In one series of tests, people were asked to forecast the next week’s closing value for the Dow Jones Industrial Average. To account for uncertainty, they were then asked to estimate a range within which the closing value would likely fall. In picking the top number of the range, they were asked to choose a high estimate they thought had only a 1% chance of being exceeded by the closing value. Similarly, for the bottom end, they were told to pick a low estimate for which they thought there would be only a 1% chance that the closing value would fall lower. If they were good at judging their forecasting accuracy, you’d expect the participants to be wrong only about 2% of the time, but hundreds of tests have shown that the actual Dow Jones averages fell outside the forecast ranges 20% to 30% of the time. Overly confident about their ability to predict, most people set too narrow a range of possibilities.

People are often overly cautious or prudent in forecasting. When faced with high-takes decisions, we tend to adjust our estimates or forecasts “just to be on the safe side.” An extreme example is the “worst-case scenario analysis” once popular in the design of weapons systems and still used in certain engineering and regulatory settings. Using this approach, engineers designed weapons to operate under the worst possible combination of circumstances, even though the odds of those circumstances actually coming to pass were infinitesimal.

Even if we are neither too confident nor unduly prudent, we can fall into a trap when making estimates or forecasts. Because we frequently base our predictions about the future on our memories of the past, we can be overly influenced by dramatic events those that leave a strong impression on us.  We all, for example, exaggerate the probability of rare but catastrophic occurrences such as plane crashes because they get disproportionate attention in the media. A dramatic or traumatic event in your own life will distort your thinking forever. You will assign a higher probability that similar things might happen to you and to others in the future.

To minimize the distortion caused by variations in recallability, carefully examine all of your assumptions. Many of these traps work, not in isolation, but in concert with each other, thus amplifying their power to distort. When we make a fast decision, thinking we are relying on gut instincts, we are often falling into a trap.  Before you spend too much time actually making a decision, take time to review how you are making it. Try to not get emotionally attached to one outcome before you’re sure your decision-making process serves you well.

One way I’ve made these traps familiar to myself so I’ll recognize them in my own thinking has been to see them in situations around me. I teach a monthly lesson to fourth graders at our nearby school here in Sausalito. The students have already become adept and gleeful at showing examples of these traps to their parents –and are now reminding me when I fall into these traps in responding to their questions and actions. Ah the wonders and wisdom of mutual mentoring.