Make Your Daily Interactions More Satisfying For Yourself and With Others

Suppose a colleague gives you a compliment as you meet her in the hallway and then another person accidentally bumped you in passing. You will respond more quickly and strongly to being bumped than to being complimented, even if the person who knocked into you immediately apologizes. You have little power over those instinctual reactions. In fact, your mood will be altered longer from a bump than a compliment and you will remember it longer.

Why? Not because you are a negatively inclined person, but because our strongest, most primal instinct is for survival. That instinct is hardwired in our brains so that our most swift and intense reactions are to protect ourselves from any sign of “danger.”

When you react negatively, even with a briefly hardened face or a momentary sharp tone the other person instinctively escalates in a ping pong reaction back and forth. It’s easier for an interaction to fall into distrust and conflict from one “bad” action than it is for one positive action from to boost bonding. Since you can’t re-wire your brain to change your gut instinctual reactions, you can compensate by appearing “safe” when you first meet and re-meet people. Here’s some helpful ways: 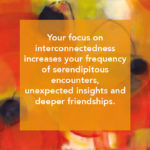 First, move and speak slower, lower and less at first so the other person can gain comfort and familiarity with the situation, even if he already knows you and has had positive past experiences with you. In the beginning, don’t talk loud and quickly or move fast and frequently, especially with high, quick arm gestures.

Such gestures also rob you of the appearance of power. If your voice is lower and slower, your sentences shorter and your gestures are spare, then the other person will accept your more quick and direct body motions and verbal suggestions later on, even thought they probably won’t be conscious of why.
Second, since people instinctively like people who are somehow like them, demonstrate the part of you that is most like them. Refer to common experiences, background or places. Adjust your voice level and rate and amount and kind of body motion to become more like theirs. Children do this instinctively. Only as we get older do we lose the instinct to adapt to another’s behavioral style.

Here are some other suggestions for gaining and holding someone’s attention:
1. Be vividly specific
A specific detail or example proves a general conclusion, not the reverse. A vivid, specific detail is memorable, while a general statement is less credible and easily forgotten. Ironically, most adult conversation and advertising is general. Children are more likely to be vividly specific and thus more memorable. When you want to be heard and remembered, characterize your information or request with a vivid, specific detail, example, story or contrasting options. Involve words that relate to the senses. For example “beautiful color” is not as vivid as “blue” which is not as vivid as “cobalt blue.”

2. Be plainly clear
Avoid wearing patterned clothing or other detail on your clothing, especially on the upper half of the body, because it will shorten the attention span of the person with whom you are speaking.

3. Look for the underlying issue.
When you are arguing for more than ten minutes, you are probably not discussing the real conflict and are thus unlikely to get it resolved in the discussion. Look for the underlying issue. For actionable ideas about how to respond positively and productive to people who are acting negatively, read Robert Bramson’s classic, idea-packed book, Coping With Difficult People – my favorite book, among many, on this topic.

4. Deepen their commitment before you ask for more
The more time, actions or other effort someone has put into something, someone or some course of action, the more deeply they believe in it, will defend it and will work on it some more. If you want more from the other person, wait until he has invested more time, energy, money or other resources to ask for it.

5. Bring out their better side
More important than attempting to get others like you when they first meet you is for them to like how they feel when around you. If they do they will often see in you the qualities they most like in others, sometimes even if you do not demonstrate you have those traits. The opposite is also true. If they don’t like how they feel when around you they may project onto you traits they do not like in others. Hint: Pick the moments when someone feels most at ease and happy around you to move the relationship forward. Don’t make suggestions or requests when they are acting in an unbecoming way. Your efforts will only backfire. Plus specifically praise the behavior you want to flourish.

6. Literally move to motivate them
Motion literally activates emotion and makes experiences more memorable. Motion attracts attention and causes people to remember more of what’s happening and feel more strongly about it, for better or for worse. Get others involved in motions with you that create goodwill: walking, sharing a meal, handing or receiving a gift, shaking hands, or literally turning together to face a new scene. That’s how you are more likely to literally get “in sync.” Even your vital signs become more similar: eye pupil dilation, skin temperature and heart beat. 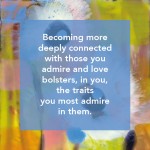 Remember the many
compartments of the heart,
the seed of what is
possible. So much of who
we are is defined by
the places we hold for each
other. For it is not our ingenuity
that sets us apart, but our
capacity for love, the
possibility our way will
be lit by grace. Our hearts
prisms, chiseling out the