What Makes Us Laugh?

All Jokes Come Down to One of Four Themes
Anywhere in the world, all jokes can be reduced to just one of these themes, according to professor Richard Wiseman, a British psychologist who, via his LaughLab, conducted mass-participation experiments about what we think is funny. (See * below) Also see what was voted as the funniest joke in the world in 2002.

What’s the Funniest Animal?
Wiseman also found that if you insert different animal names into the same joke, one animal evokes more laughter than any others. Guess which animal? (See ** below.)

How Hard Is It to Get Others to Laugh?
Mysteriously difficult, according to scientists, and many professional comedians agree. In fact, it is easier to get others to cry or smile than to laugh. While you need to evoke a response in only one part of the brain for the first two, you must stimulate a more complex “laughter circuit” involving many more parts of the brain for laughter to happen. 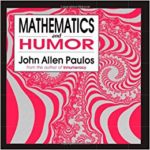 Several researchers, including John Allen Paulos, author of Mathematics and Humor, discovered that when we attempt to understand puns, we process them on the left side of the brain. More complex, non-wordplay jokes are sent to the right side of the brain to comprehend, triggering many more parts of the brain along the way.

Researchers Wendy Wapner, Suzanne Hamby, and Howard Gardner, in a paper titled “Brain and Language,” described the left side of the brain as a “highly efficient, narrowly programmed linguistic computer. In contrast, the right hemisphere of the brain constitutes a suitable audience for a humorous silent film.” Perhaps that’s why comedians often use their body and props to silently act out a part of their story: to activate more parts of your mind.

What Makes Us Laugh?
Here are three clues from the researchers: incongruity, superiority, and the pattern of three:
• Incongruity
A joke: “I went to my doctor for shingles. He sold me aluminum siding.” When we see or hear something incongruous, we are surprised into laughter, often as a sort of relief. This may be a primitive response for alerting your community in ancient times that an apparent danger is, in fact, nothing to fear.

V. S. Ramachandran and Sandra Blakeslee, in Phantoms in the Brain, wrote, “The main purpose of laughter might be to allow the individual to alert others in the social group that the detected anomaly is nothing to worry about.”

• Superiority
Those who tell us funny stories about their own foibles – or those of others – help listeners feel momentarily superior to the jokester or to the people who’ve been made the butt of the joke.

• The Pattern of Three
A joke: “My favorite books are Moby-Dick, Great Expectations, and Rock Hard Abs in 30 Days.” Comedians have long believed that jokes work best in a pattern of three parts. Offer two straightforward examples and then a third one to shatter the pattern.

At one time, Richard Wiseman was probably Britain’s most well-known psychologist.He took his humor research to the world via the Internet. His mass-participation experiments cover emotions from lying to laughter. For example, he asked participants to detect who was lying after being exposed to accounts offered on television, on the radio, or in print. (See *** below.) Wiseman decided to learn about global differences in humor and opened a web site. The server for the site broke down when Wiseman got three million hits in the first five days after the site opened. Among other studies, he asked visitors to contribute their favorite jokes and rate others’ jokes on a 1-5 rating scale. He has received over 40,000 jokes.

About two-thirds of the submissions are so off-color, violent, or otherwise offensive that he chooses not to post them for site visitors. With Wiseman’s permission, here’s a description of one of the mass- participation experiments: Wiseman and his colleagues asked people who took part in LaughLab to answer questions that involve making various estimates, such as: “How many words are there on one page of a typical paperback novel? A) Under 500, B) 500-600, C) 600-700, D) 700-800, E) Over 800.” They found that people who are good at this type of question (the correct answer is under 500) “tend to have good frontal lobe activation. Those who had wildly inaccurate estimates have very bad flexible-thinking skills.”

People whose answers were way off often liked simple jokes such as, “What’s pink and fluffy? Pink fluff.” or “Which day of the week do fish hate? Fry-Day.”
~ ~ ~ ~
* Almost all jokes, according to Wiseman’s research, seem to involve one of these four themes:
1. Someone trying to look clever and taking a pratfall.
2. Husbands and/or wives who are not being loving.
3. Doctors being insensitive about imminent death.
4. God making a mistake. 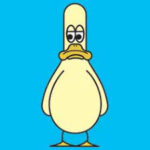 ** A duck
*** Of those options, people are most likely to detect lying they hear on the radio.