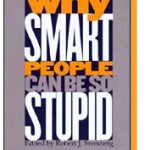 … you may want to recognize ways to avoid such self- sabotage — not that you would need such advice, of course, yet your intelligent friends might.  According to the 15 experts cited by Yale professor, Robert J. Steinberg, Why Smart People Can Be So Stupid, high I.Q. people are more likely to fall into faulty thinking, yet other experts think that some of their conclusions are faulty.

”Stupid,” for example is used in the book to mean “wrong” and “smart” refers to intelligence – of a certain sort. President Clinton, for example, is called stupid because he got caught in his lies regarding the intern. Perhaps because they are “smart” some of the book’s contributors sometimes fall into the trap of sounding fuzzy and/or contradictory in defining smart and stupid behavior.

“Intelligence by itself doesn’t make you rational. Thinking rationally demands mental skills that some of us don’t have and many of us don’t use,” suggests Kurt Kleiner 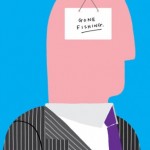 . And context has considerable influence on what we see, feel, think and do.

It helps to think both fast and slow and to see how blind belief in ideology can make us fall for dumb ideas.

Yet others have suggested that we can make wiser decisions by sidestepping four apparently obvious yet sometimes ignored Mental Traps:

1. The Egocentrism Fallacy: Expecting that the world revolves, or at least should revolve, around you. Acting in ways that benefit your, regardless of how that behavior affects others.

2. The Omniscience Fallacy:  Believing that you know all there is to know and therefore do not have to listen to the advice and counsel of others

3. The Omnipotence Fallacy:  Thinking that your intelligence and education somehow make you all-powerful.

4. The Invulnerability Fallacy: Presuming that you can do whatever you want and that others will never be able to hurt you or expose you.

Improve your performance. Get motivated to persist longer.

The findings from Carol Dweck’s experiment can help us stick to a task that matters to us. Students were randomly assigned to read one of two articles, the first suggested that intelligence is “fixed”; the others argued that it was or “malleable” – open to improvement. Then all asked to do a difficult task.

Those who’d read that intelligence was malleable were more persistent in gaining mastery in that task.

Most gratifyingly, other studies found that:  “teaching students the malleable theory of intelligence not only aided their performance in the face of obstacles on an individual intellectual task, it actually raised their college grade point average and their commitment to school.”

Since, as Malcolm Gladwell and others suggest that mastery of a subject requires 10,000 hours of learning and practice, this strengthened desire to persist on a task (or subject) could evoke a self-fulfilling prophecy of mastery.

To further hone your performance, understand the Incentive Caused Bias, other decision making traps we all fall into – and how to argue better.

Give verbal snapshots that penetrate the mind and the gut in an instant then linger, leaving a bright afterimage.