When a Conference Audience Gets Ugly in Live Time 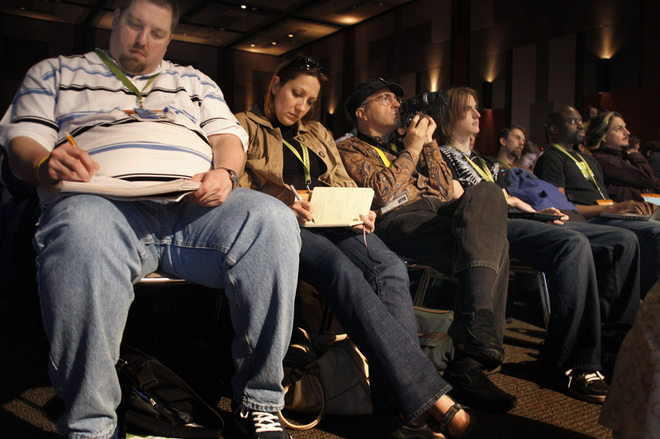 Traditionally, conference attendees fill out conference evaluations after a session or

conference is over, but the SXSW conference for tech and entertainment folks is anything but traditional. Some attendees heckled in real time at the  “pandering” and/or “self-promoting” style of Business Week’s “Valley Girl” columnist Sarah Lacey during her interview of Facebook CEO, Mark Zukerberg.A “trainwreck.”(Advice: know your audience.) A surge of audience members started criticizing her via their

blogs and twittering micro-blogging. It got vicious.The opposite could also happen, of course, if an audience raved in real time about an interview, speaker or panel. Then the conference organizer could extend the session. The era of the passive attendee is fast-passing. Live blogging just started recently, mainly at tech-centered conferences or unconferences. Audience twittering just started within the past 14 months or so. Yet the trend will spread quickly to more kinds of meetings. Parents are learning text messaging to keep in touch with their children. Young meeting attendees expect to make their views heard, in the moment. As more meeting attendees adopt these social media tools, they’ll use them the conferences they attend. Thus more and more attendees won’t wait to vote on the questions the speaker or panel wants to ask. They’ll be commenting, asking the questions and trading opinions as the program unfolds. They’ll take photos from their seat, then try streaming video.That means that savvy meeting planners will eventually “have” to find a way to track the unfolding comment stream of the audience and choose a way to respond to them, either during or right after the session. Speakers, panelists, meeting planners and sponsors face a whole new attendee-centered meeting future, just as companies are experimenting with how to operate in a customer–centered world. Now that’s a fast-unfolding future full of ugly and uplifting mob scenarios.