Will We Tell Others About Your Contest?

Last year VW launched “The Fun Theory” contest for best ideas to evoke better behavior in us. My favorite experiment, with more than a million views,  is “Piano Stairs.” 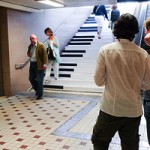 Does turning a set of subway stairs into a real-life piano encourage people to use them? Yes, 66% more.

My second favorite :  Does making a trash can sound like a 50 foot-deep well cause more people pick up their trash? Yes.

What a clever Me2We way to change others’ behavior – by making the new alternative more fun – and to attract avid followers to the contest.  Each new entry was a fresh media hook.

Another:  Will a pinball machine at a bus stop  (that involves  moving your feet) be sufficiently fun that you’ll be enticed to play it, thus getting exercise?

Seven takeaways for when you create your viral contest, sweeping your organization out into many conversations

1. Evoke Curiosity and an Upbeat Feeling

How smart of VW to inspire smiles and gain the “halo” for encouraging the creation of ideas that inspire “us” to make smarter choices.

2. Make a Relevant Connection to Your Brand

When you create your contest, with a theme that reinforces your brand personality (VW – simple, fun and reliable), make sure that the online design also embraces that image.  Note, for example the elegantly simple design of The Fun Theory’s contest site.  Reinforcing “reliable”, VW didn’t “just” spotlight the videos but included the backstory of how the experiment was created.

3. Make it Easy for Participants to Join the Conversation and Gain Bragging Rights

4. Visibly reward best entries with something they want.

5. Bring valuable allies closer by inviting them to be judges.

Applicants made the contest more sticky by asking for votes, showing people what they would do (create an Anywhere Organ) if they won a “grant.” 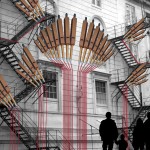 7. Don’t “Shout” Your Greatness, Let Fans Do it for You

Then there’s the classy, understated way VW sponsored the contest, by simply inserting their logo, not as an “ad” but as “An initiative of Volkswagen.”  By keeping the logo in the background, underwriting “an initiative” appointing a “jury” to judge, providing  – not “prizes” – but “grants” to winners the contest seems less like advertising and more like a service of VW. In so doing it may have polishes its halo in our minds, and so you can you, by adding your version of these elements to your contest.

As Arnold Toynbee wrote, “The supreme accomplishment is to blur the line between work and play.” 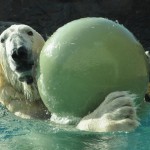