I Was Completely Surprised by His Behavior 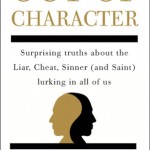 Reinventing himself when he arrived at college Sam, “who had never had much luck with women” successfully beguiled a string of women into one-night stands, leaving his male friends shaking their heads in wonder because the women, though dumped, saw him as “sensitive, caring and sweet.” Also odd, Sam took up the habit of frequently washing his hands.

Now this might make you sufficiently curious to read the book in which this story is told, Out of Character. As you might have anticipated, Sam was subconsciously wiping his hands of guilt. A Macbeth effect for a man who’s dorm room was untidy.

Consider the sexual foibles of Eliot Spitzer, Tiger Woods and others. Yet, under the right circumstances we women can act as badly men. In fact, rather than acting heroically or evil we are all influenced by context and cues much of the time, according to the co-authors of this book.  Blame it our brain in constant combat, between the emotional and rational side. Yet understanding how we can convince ourselves to cheat, then minutes later, condemn others for the exact same behavior (another experiment in the book) can lead us to make more moral choices that serve us well in the long run, if not always in the tempting moment. And to stand up to bad behavior as Dan Weiss did at the Kennedy Center.

Here are three more examples of how we can be influenced to act badly – or better:

1. When angry people are more likely to see guns in the situation.

2. Experiment subjects are asked to watch video vignettes, some saw a skit from Saturday Night Live  and others got stuck watching part of a dull documentary of a quiet Mexican village. Then all were  asked how they would respond to a situation in which they are standing on a footbridge adjacent to trolley tracks. The only way they can save the lives of five men further down the tracks is to push a nearby, burly man off the bridge and onto the tracks, thus stopping the train.

Those who watched the SNL skit were three times more likely to push the man onto the tracks. What made the difference was the emotional state the videos evoked just before they were asked.  Those who watched the SNL skit felt upbeat and were thus able to overcome their aversion to killing one person to save five. They operated from their rational mind – thinking it made logical sense. Yet emotional contagion can influence our behavior in many ways. We are inclined  to belittle the next person we are around after we treated that way, for example. Co-author, David DeSteno suspects that “we act honorably—to the extent that we do—because we feel we should, not because we think we should.”

3. Sitting in a waiting room with a dirty rug, wall paintings askew and a dirty tissue on a table means you are considerably more likely to view the person who comes up to help you as not only less attractive but also less well-intentioned and skilled. You justify your less gracious behavior.  To warm others up towards you, consider storyboarding the multi-sensory cues that  people experience at your store, workplace, event or home.

Imagine the implications for our behaviors and settings at work or home. Later in the book see how you can view someone’s actions as arrogance or justifiable pride, depending on whether you believe that person knows what she or he is doing. Those asked, for example, about George Bush or Barack Obama’s actions are seeing them through the lens of their opinions about each one.  Similarly we are more likely to feel compassionate towards those with whom we can identify – they act and look like us.

That probably does not surprise you.

Yet when soldiers from vastly different backgrounds march together just once, they see and describe themselves as more alike and take more actions to support each other. One march does that.  Synchrony. It happens even when individuals in a study are asked to tap their hands in sync, some tap along with one person, others follow a different person.  Afterwards they answered questions that indicated they liked the people who tapped with them more than the others.  Makes you think of what you might want do when first convening a project team or starting the family off on a vacation?

Especially when I was younger I was astonished by heroes with feet of clay, not looking inward at my own incongruent actions. Coward or hero? Chaste or promiscuous? Bigoted or tolerant? We’ve played many roles.  As Dan Gilbert notes, “the hero and the villain that live inside each of us.” Reading this book is a fresh reminder that we all act “out of character” sometimes in ways that can make us ashamed or proud, depending on whether our emotional or rational brain is in the driver’s seat. We need both and David DeSteno and Piercarlo Valdesolo helped me see ways to balance them.

If you, too, are fascinated by what influences how we act towards each other then you may also enjoy Sway, Nudge, Multiplicity, Tell to Win, Influence, Just Listen, and Smart Choices.